WHSL Evidence-Based Medicine: What is Meant by Evidence? 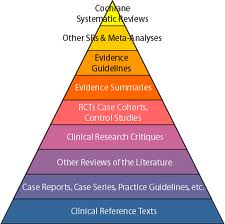 Image taken from HealthLinks, University of Washington under a creative commons license.

Hierarchies of evidence have been somewhat inflexibly used, and criticised, for some decades. The CEBM "levels of evidence" were first produced in 1998 to make the process of finding appropriate evidence feasible and its results explicit. These have been revised in light of new concepts and data.

The "levels" are essentially a short-cut to finding the likely best evidence. While ideally all the evidence that might help to answer a question should be examined, doing so is often impractical. For example, if you need to look at the evidence for the use of warfarin in atrial fibrillation, a PubMed search of the words "atrial fibrillation AND warfarin" yields thousands of hits. As you will not have time to read them all, you will need some guidance as to which articles might be the most valid and useful for purpose.

For example, if your main interest is the size of the benefit of warfarin and its common harms, it would be reasonable to focus on systematic reviews or trials. If no trials had been shown, you might look at the cohort studies, etc. Since there are several trials, it would be sensible to find out if a systematic review is being planned, and recommend or subsequently undertake one if there is not.

This table has been set out as a series of "steps" - the columns. Each column gives the likely level of evidence, and indicate the steps you might take in searching. How many steps you take in your search are limited by your time and the databases and journals available to you. The rows indicate what type of research is likely to be best for each type of question. Evidence for different outcomes may have differentl levels and come from different sources (studies). It may be necessary to assess several studies to find the benefit or harms of a therapy, for example. The quality of evidence is not necessarily the same as the strength of recommendation. You will need to use your judgement (critical thinking) at all times in assessing the evidence.

In 2004, the editors of the U.S. family medicine and primary care journals and the Family Practice Inquiries Network published a paper on a unified taxonomy called Strength of Recommendation (SOR) Taxonomy. This taxonomy made use of existing systems for judging study quality while incorporating the concept of patient-oriented (e.g., mortality, morbidity, symptom improvement) rather than disease-oriented (e.g., change in blood pressure, blood chemistry) outcomes as most relevant.

EBM uses a hierarchy of evidence to guide clinical decisionmaking. The hierarchy of evidence is a system of classifying and organising types of evidence, typically for treatment and prevention, usually from the strongest to the weakest. Evidence should be obtained from the highest position in the heirarchy. Evidence alone is never enough - the benefits and risks, inconvenience and costs associated with alternative management strategies must always be traded off in consideration of the patients' values and preferences.